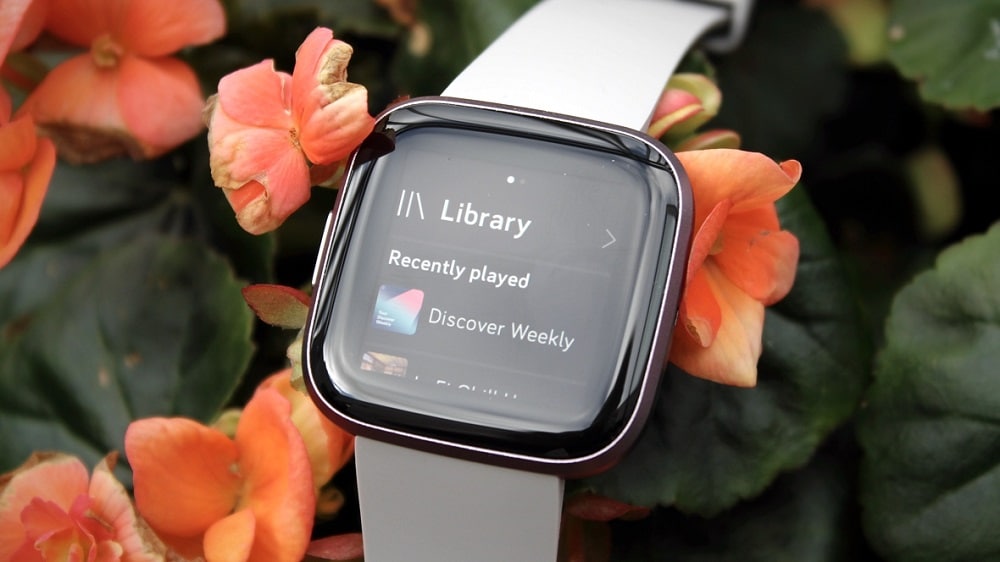 Smart Watches are the highest trending gadget in town, where Fitbit Versa is one of the hot choices amongst the consumers. The “young” and the “old,” like to have it on their wrist to benefit with the high-end technology. Smart Watches are preferred devices to fulfill fitness goals, track movement activities, and much more, but its compatibility with music applications is what attracts most of its users. Regarding the same, the potential customers want to know will Spotify works on Fitbit Versa.

Fitbit Versa is a stylish smartwatch that has stable connectivity with Bluetooth, Wifi, etc., which lets users enjoy music and podcasts on earphones. But playing audio is possible if the user stores the music files in its 2.5 GB space, or the other way is to online stream on the unpopular Deezer and Pandora Apps. But the concerning fact here is that Spotify Fitbit Versa association does not exist.

Spotify is a highly rated music application platform that has a long list of musical songs, and most of the music lovers prefer to use this app for enjoying songs, podcasts, and videos. It can be listened on many popular brands of Smart Watch models but is certainly not compatible with Fitbit Versa. At first glance, Spotify music on Fitbit Versa does not seem possible. Still, DRmare Spotify Music Converter is a unique software with which the paid or free Spotify user can accomplish his musical needs on the device.

Part 1. Can You Play Spotify On Fitbit Versa?

If somebody asks you, “can you play Spotify on Fitbit Versa” the obvious answer would be, “no, I am unable to do that.” The reason behind why the new accessory is not playing your favorite songs is because the Fitbit Versa does not support Spotify’s application. The company has provisioned its customers to enjoy music through other apps like Pandora or Deezzer. Still, they will not be able to sync the Spotify playlist to Fitbit Versa directly.

So if you wish to listen to the Spotify music on Fitbit Versa, then the only way out is to have them downloaded and saved into the device. The Fitbit Versa has an inbuilt space of 2.5GB, which is sufficient to keep quite a large number of files, and the user can comfortably play them on wireless earphones. Since you cannot download the songs directly onto the Fitbit Versa, you need to download the file on your PC in the mp3 format, and then transfer it to the SmartWatch. Follow the below-given procedure to know how to download Spotify music on Fitbit Versa.

Spotify is a technologically advanced application that gives its users a flawless and soothing experience while they are listening to music. The free version of Spotify permits online songs-play, while the premium consumers can also listen to it Offline, by downloading them. But the problem is that the downloaded songs are device-specific, in encrypted form, and cannot be shared over any other machine, like computers, smartwatches, or other mobiles.

The question still arises, “can the Fitbit Versa play Spotify music?” In the case of Fitbit Versa, it has the option to store up to 2.5GB of audio/video files that can be played over Bluetooth speakers, TVs, earphones, etc. but the data should be in mp3 format. That means the user has to upload the Spotify songs to the Fitbit Versa only after converting them into an MP3 format. Since the purpose is to manage the Spotify Fitbit Versa syncing and enjoy the Spotify playlist, the user can most comfortably do this with the help of DRmare Spotify Music Converter.

Spotify is among those applications which have the highest set of consumers in any particular category. With a wide range of songs, albums, and artists, it is now the top-ranked music application. Due to its high-end restrictions in usage, people face a lot of trouble. The free version consumes a lot of data with streaming songs and continuous advertisements. While the premium users can enjoy Offline music, but certainly cannot share them on another device.

DRmare Spotify Music Converter is the most effective solution to all the issues related to music download or format conversion. You might be worrying, “can the Fitbit Versa play Spotify,” but DRmare conclusively resolves the problem. It can quickly convert the songs to various suitable formats, and download them on the computer, which is now available to transfer on other digital devices.

It is a powerful Spotify Music Converter with which the user can convert an unlimited number of songs from Spotify app and save them to create a personal playlist on the hard drive. DRmare can change the file to many different formats, including MP3, which is essential for Spotify Fitbit Versa intermediary.

DRmare Spotify Music Converter is compatible with both Windows and Mac computers. A free trial version of the software can be downloaded anytime but has limited features enabled. The complete tool can be purchased on a lifetime basis as Single-User, Family, and Single-Bundle editions. Check out below some more notable features of the software.

For file converting, the DRmare tool directly fetches the song from the song link entered into the designated panel, and the song gets stored on the system instantly without any compromise with the quality of the music. To know how to download Spotify music on Fitbit Versa, the first step is to download the music over the PC in MP3 format. For this, you need to download & install DRmare tool on the computer and read the steps below to know how it works.

Step 1. Download the DRmare tool on your PC, and launch the program after installation

Step 2. The DRmare tool also loads the Spotify application, where you have to visit the store and review the songs, or playlists.

Step 3. Select the song to be downloaded and drag it to the DRmare panel, or you can simply copy the URL and paste it into the search bar of DRmare page.

Step 4. Now click on the DRmare search bar to set the preferences in the window.

Step 5. Here you can set the required file format to MP3 or any other, and required changes to Channel, and Bit Rate.

Step 6. Click on the Convert button after setting the preferences

The process will take a few seconds to minutes, depending upon the internet speed and total file size. Later you can download the converted Spotify music to Versa.

Now that you have downloaded your favorite music on your PC in MP3 format, the final step is transferring them to enjoy Spotify music on Fitbit Versa. This is the official method devised by the company, where the user needs to download & install the Fitbit Connect application on the PC, to share any files to the smartwatch. The Fitbit Connect application helps in establishing a secure connection with the Fitbit Versa and ensures safe, error-free, and efficient data sharing across the PC and smartwatch. Since the device has a decent memory space, it is suggested to upload the most preferred songs first, before the memory gets flooded, and the Fitbit Versa denies transferring any more files. Read the process given below to how to download Spotify music on Fitbit Versa, which is pre-downloaded on the computer, and is to be transferred using Fitbit Connect.

Step 1. Turn On your PC to install the Fitbit Connect app from the website, and initialize the application.

Step 2. Click on the “Manage my music” option on the Fitbit Connect app.

Step 5. To receive the files from the computer to the Fitbit Versa, you have to click on the “Settings” icon.

Step 6. Go to the “Advanced Settings” and hit the “+” icon, which allows the users to transfer all or some files comfortably from the pre-created folder.

Once the process completes, you can listen to the Spotify songs on Fitbit Versa through any of the modes.

The Fitbit Versa is a smartwatch with a high end technologically advanced system. It is a standard brand and is encapsulated with several unique features, including the price range that draws the attention of many significant buyers. The technological part of the Fitbit Versa is unquestionable, but one thing that creates apprehensions in their minds is the Spotify Fitbit Versa connectivity.

Listening to music is one thing that is common in everyone, and people prefer it during exercises or other activities. Since Spotify is one of the most downloaded music apps, it is obvious to enquire that will Spotify work on Fitbit Versa. But no more worries about compatibility issues as with DRmare Spotify Music Convertor Spotify music on Fitbit Versa is made possible. The user can comfortably download unlimited music, podcasts, or audio-books from Spotify app on their PC without any encryptions. It can later be transferred to the internal memory of Fitbit Versa, with a guarantee of 0% data loss on sound quality or tags.