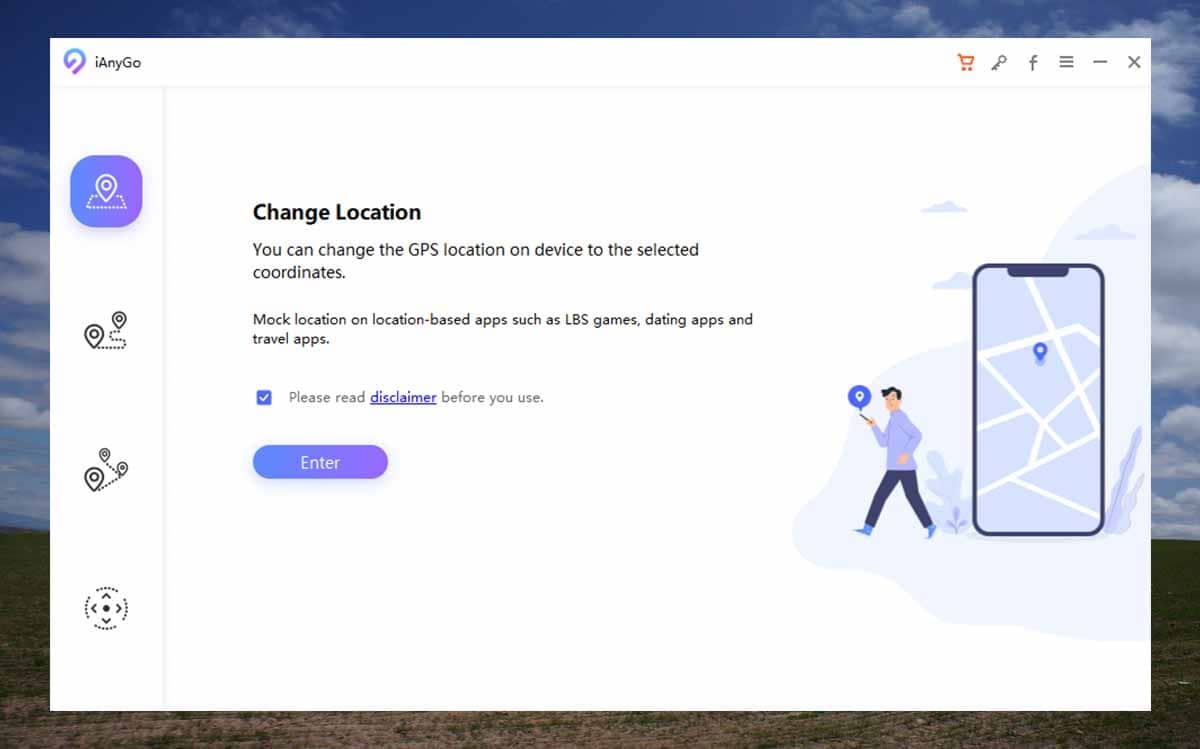 Tenorshare iAnyGo is a software that allows you to change your iPhone location to anywhere in the world with one click. Just open the map, enter your desired location, and you are automatically teleported to this new location.

This makes it the best iPhone GPS location changer for many reasons, among which is the ability to play Pokemon GO without moving an inch. And there are three ways you can simulate GPS movement using this location faker.

The first is to choose two spots on a map, and the app will make it seem like you are moving in a straight line between these points.

The second is to select multiple spots, and iAnyGo will make it seem like you are moving from each point to the other. This will be useful if you want to curve out a specific path you want to travel in the game.

The third option involves using a joystick to fake GPS movement in any direction you want.

iAnyGo also allows you to import a GPX file containing a specific route you want to travel.

Apart from Pokemon Go, you can also use this location spoofing tool to fake locations on social media apps like Twitter, dating apps like Tinder, and Find My Friends if you are using the older versions of iOS.

Speaking of which, this GPS spoofer works on all versions of iOS, including the latest iOS 15, and it can be installed on both Windows and Mac computers.

With just one license, you can fake the GPS location on up to 15 iOS devices at the same time.

What is Tenorshare iAnyGo?

Have you ever used an app but couldn’t get the best of it because of your location. We all have?

The only way through these limitations is to use a location faking tool.

Tenorshare iOS is one such app that will change your iOS real GPS location to any other location you choose.

In this post, we put the software to test to determine if it really fakes your iOS location and whether it works with Pokemon Go.

Can you use iAnyGo location spoofer to collect Pokemons that are only available in specific regions? Can you hatch eggs without walking? How do you take over gyms in a different location without being physically in the location? Can you use iAnyGo to find raid battles far from your physical location?

These are all questions we will be answering in this review.

There is nothing to worry about if you are concerned that Tenorshare iAnyGo may contain malware that may harm your computer or iOS device. Before installing it, we tested iAnyGo with a third-party anti-malware, and it came out clean.

Also, Tenorshare is a reputable company with no record of hiding malicious components in its software.

Still, you need to be careful about where you download the software because some unofficial sites may try and hide malicious code inside the official software.

Tenorshare iAnyGo is not a scam. There are a lot of tools that will claim to help change your iPhone location but fail to do so after purchasing. This is not one of those tools. In the next section, we will be discussing our findings after testing the software, and from the results, we can conclude that Tenorshare iAnyGo is a legit GPS changer.

Tenorshare iAnyGo doesn’t just work; it’s also simple to use. Below, I’m going to demonstrate how it worked for me and give you tips on avoiding getting banned on Pokemon Go for using a location spoofer.

I would start with installation, but that’s pretty straightforward. You download the software from the official site and run it on your computer.

After installation, when you launch Tenorshare iAnyGo, it takes you straight to the one-click location changer. You can use this option to teleport from one region to another in Pokemon Go.

How to teleport in Pokemon Go using Tenorshare iAnyGo

Step 1. Open the option to Change Location and click Enter. You will be prompted to connect to your iOS device.

Your phone should be unlocked for iAnyGo to connect to your GPS successfully.

Step 2. Once the software detects your iPhone or iPad, it will open a map. Enter any location you want to teleport to and click on Start to Modify to change your iPhone GPS. Your Pokemon Go app should be closed when modifying your GPS.

It will only take mere seconds to change your location. And now, when you reopen Pokemon Go, you will have automatically teleported to the chosen location.

As we mentioned, iAnyGo provides you with three methods to fake natural GPS movement on your iPhone or iPad.

Step 1. On the iAnyGo interface, navigate to the Single-Spot Movement option and click Enter.

Step 2. If your phone is already connected, you will automatically be taken to the map.

Step 3. Now choose your start point and end point, then click on Start to Move to begin fake GPS movement. But, even before that, there is the option to select the speed of movement. Do you want it to seem like you are walking, on a bike, or in a car? You can also select how many times you want to move between the selected points.

Step 4. Once you have put your preferred settings and start to move on the software, you will notice your character on Pokemon Go also starts to move.

Step 1. On the iAnyGo interface, navigate to the Multi-Spot Movement option and click Enter.

Step 2. If your phone is already connected, you will automatically be taken to the map.

Step 4. When you click start to move on iAnyGo, your character in Pokemon Go will also start moving.

Step 1. On the iAnyGo interface, navigate to the Joystick Movement option and click Enter.

Step 2. If your phone is already connected, iAnyGo will automatically open a map showing your current location, and there will be a joystick at the bottom left. Use the joystick to move in any direction you want. If your iPhone or iPad is by the side of the computer, you can see your Pokemon Go character move in the direction you choose.

For reasons we can all understand, Niantic will ban you if they discover you are using a GPS spoofing tool. You may get permanently banned on the extreme, but it’s usually a soft ban. What happens during a soft ban? Well, Pokemons flee when you try to catch them and you can’t loot from Pokestops.

The trick is not to make it obvious you are using a location spoofer. And how do you do that?

Tenorshare iAnyGo Verdict: This is one of the few location changing tools you can use on Pokemon GO and avoid getting banned. It’s simple to use and provides multiple options to change your GPS location. I like that when you choose multiple spots, iAnyGo simulates movement along real roads and paths. I also like that it works with other location-based apps apart from Pokemon Go.

If, for some reason, Tenorshare iAnyGo does not meet your expectations, here are some other top Pokémon GO Spoofers for iOS to consider.

Dr.Fone virtual location allows you to change your GPS location in three ways.

Dr.Fone virtual location can be installed on both Windows and Mac computers, and it works with all iOS devices, including those running on the latest iOS.

iMyFone AnyTo is another software that will help spoof your location in Pokemon Go without getting banned. It has a 1-click feature to teleport your iPhone or iPad GPS to any location instantly, but you can also opt to move from spot to spot for more natural movement. AnyTo also has a GPS joystick and allows you to import a GPX file to travel a preset route.

With just a single license, you can change the location of up to 5 iOS devices.

iMyFone AnyTo can be installed on Windows and Mac computers and supports the latest iOS for iPhone and iPad.

The software also allows you to import a GPX file containing a preset route that you want to travel.

MockGo works on all iPhones and iPads, including those running on the latest iOS version.

How to change iPhone location without jailbreak

How to play Pokemon Go without moving

If you want to play Pokemon Go without moving, you use a location spoofing tool that can fake virtual movement. But not all location spoofers work with Pokemon Go. Some get detected by the game algorithms and may lead to you getting banned from the platform.

Tenorshare iAnyGo is a GPS spoofer that we have tried and it worked perfectly with Pokemon Go.

Can I use a VPN for Pokemon Go

A VPN can help you teleport to a different region in Pokemon Go. However, unlike Tenorshare iAnyGo, a VPN cannot fake GPS movement. So, you will still have to walk to catch pokemons and hatch eggs.

What’s the best spoofing tool with joystick for iOS

A GPS joystick is a nire to have because it helps simulate natural movement. There are multiple tools with GPS joysticks but the best we have tested is Tenorshare iAnyGo.

How to fake location on maps

If you want to fake location on maps you use a GPS spoofing tool. One of the best tools we have tested is Tenorshare iAnyGo which works on all location-based apps on your iOS device.

How to fake location on Find My Friends

If you are looking to play a trick on your friends you can use a location faker that will change your real location to any desired location you choose. Tenorshare iAnyGo is one such tool that works perfectly with Find My Friends on iOS devices.

Limiting app functionality based on location is becoming popular as time goes on. There are instances when it makes sense, but most of the time, it’s infuriating. Luckily, if you can find a great location spoofer, you don’t have to worry about any limitations.

Tenorshare iAnyGo is a top spoofing software, and hopefully, this review has given you all the information you need to make a smart purchasing decision.